about the impact of abortion.

In this article, by Brad Mattes written September 12,2014 it clearly shows how dangerous abortion can be.

Pro-abortion activists fight for abortion throughout pregnancy for any reason—no exceptions. Their fundamental argument centers on women’s health. But stunning research shows this concern is all smoke and mirrors. Pro-abortion activists have long tried to claim that abortion is safer than childbirth. For years they’ve touted manipulated numbers, trying in vain to bolster this myth. We’ve always known those statistics were bogus, and a study by Dr. Priscilla Coleman and Dr. David Reardon reveals abortion is much more dangerous to women than giving birth. And the results are sadly even more devastating to women’s health than even I had anticipated.

First, let me vouch for the authors of this research. I know them both to be solid individuals with a reputation for thoroughness. I met Dr. Coleman in Santiago, Chile where we lectured at their largest university. We again shared an academic podium in Quito, Ecuador the following year.

Second, allow me to explain why this study is so important. It’s compelling because of its unmatched scope:

The study includes a large number of women—nearly one-half-million—experiencing first-time pregnancies.
The medical records are profoundly reliable because the data was compiled from Danish government sources including fertility records of births and stillbirths, the national abortion registry and cause of death registry.
The study covers an extensive ten-year time period, providing comprehensive long-term data.
It analyzes both early and late-term abortion compared to childbirth.
In other words, this isn’t a biased study with a relatively small sample size produced to cater to pro-abortion activists—or any side for that matter. This research was conducted at the national level, over the course of a decade, providing substantial credibility, a comprehensive level of detail, as well as earning publication in respected medical journals. The reliability has been substantiated, which is why the results are even more troubling.

When it comes to which is safer—abortion or childbirth—the results speak loudly and clearly:

Pro-abortion activists prey on the fear of Americans by perpetuating the myth that if Roe v. Wade is reversed, women will suffer horrific back-alley abortions and tragic deaths. The reality is that under legalized abortion, women are being killed on a much larger scale. Remember when we heard the news that Planned Parenthood is responsible for 24-year-old Tonya Reaves’ death following a botched abortion. Reports showed that a devastating five-and-a-half hours passed between the time of her abortion and her transport to a local hospital. There’s no record that a 911 call was placed by Planned Parenthood. The autopsy report indicated that her injuries were survivable if she had received proper emergency care in a timely manner. The only difference between her death and a back-alley abortion death is that Ms. Reaves’ abortion was sanctioned by the US Supreme Court, giving her a false sense of security that the procedure was safe. Now Tonya’s one-year-old son will grow up without a mother. Sadly, there have been additional victims after Tonya’s death. And don’t forget the Gosnell “house of horrors.” 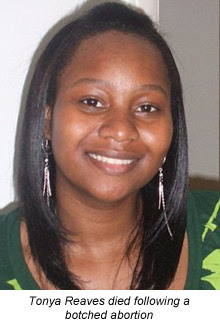 Planned Parenthood and other abortion facilities continue to lure young women under the false premise that they perform “women’s healthcare services.” Abortion isn’t healthcare. It’s killing. In fact, they’re an industry of death—killing unborn babies and exposing their mothers to a staggering increased risk of death. Let’s not let this grave injustice continue. Share this with those you know and take a stand. You now have compelling proof that abortion is not safer than childbirth. Help us warn unsuspecting women.

Protecting the lives of mothers and babies,